How to Design with Localization in Mind?

Twenty years ago, the internet was predominantly English-speaking, and only about 6.8% of the world’s population was on it. Today, circa 56% of the planet’s inhabitants are connected to the world wide web.

This massive growth in internet users has created an unprecedented necessity for websites to adapt their interfaces for multiple languages. Further, we started accommodating sites to culture — a process commonly called localization or “l10n.”

When a business opens its “doors” to a global market, there are many technical implications to the process, yet one of the most complex and creatively-engaging aspects is minimizing the friction between a person’s cultural background and a website’s interface.

In this article, we’ll look into the essential aspects organizations need to take into account when designing localized interfaces and websites. Let’s dive right in, shall we?

Why localize in the first place?

Localization has an impressive effect on businesses revenue. While it often is quite an expensive endeavor, it is most certainly a very high return investment. Here are the major benefits:

Similarly, an unlocalized app or website experience is relatively problematic for users. According to Statista, there are massive numbers of people that simply stop using an app due to weak localization.

Languages come in a large variety of shapes and sizes, and they very often drastically differ from a word length perspective.

When you begin working on a localized design, it’s essential to take into account the length of each linguistic component on your site or interface. Ironically, this is the least technical aspect of designing a site, yet it has the most potential to ruin the user’s experience with it. So it’s our responsibility to start obsessing with space in the earlier phases of the process.

Andrew Kahneman, a localization professional at TheWordPoint, told us that many languages from the Latin family, like German, Italian, French, Portuguese, and Romanian will generally demand more space than their equivalents in English, something designers should be aware of when designing for the European market.

Below, you’ll find an example of the word “views” translated into multiple European and Asian languages to exemplify the difference. 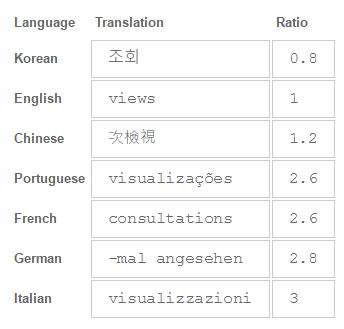 If you’re designing a site for a character-based language such as Korean, Chinese, Hindi, and so forth, it’s essential to make some changes to the font size. Here are a few basic recommendations that will considerably improve the text’s readability:

Little details that relate to an individual country’s culture can have a massive impact on how your brand is going to be accepted in a new market. It will allow you to connect with the local users and show that you are aware of their cultural peculiarities and that you’re respectful towards their heritage. You can also consider localizing your logo and other brand-specific graphic elements by integrating small cultural elements in them.

Culture is an essential instrument humans use to navigate the world around them. So it’s safe to say that the culture we belong to is in a way descriptive of the products and services we pay for, and also how we use them in day-to-day life. And while using cultural content is a simple and straightforward way to cater to a new audience, organizations need to be very careful in regards to the topics they touch when localizing their design or branding.

3. Adjust to the local palette and taste

Localizing a website’s design, however, goes much further than just adding cultural content and adapting the text to a particular culture. It’s safe to assume that, generally speaking, certain countries have specific tastes, which are especially visible when compare to other countries’ standards.

Let’s take a look at how the same company has adapted their website for the French and the American markets. 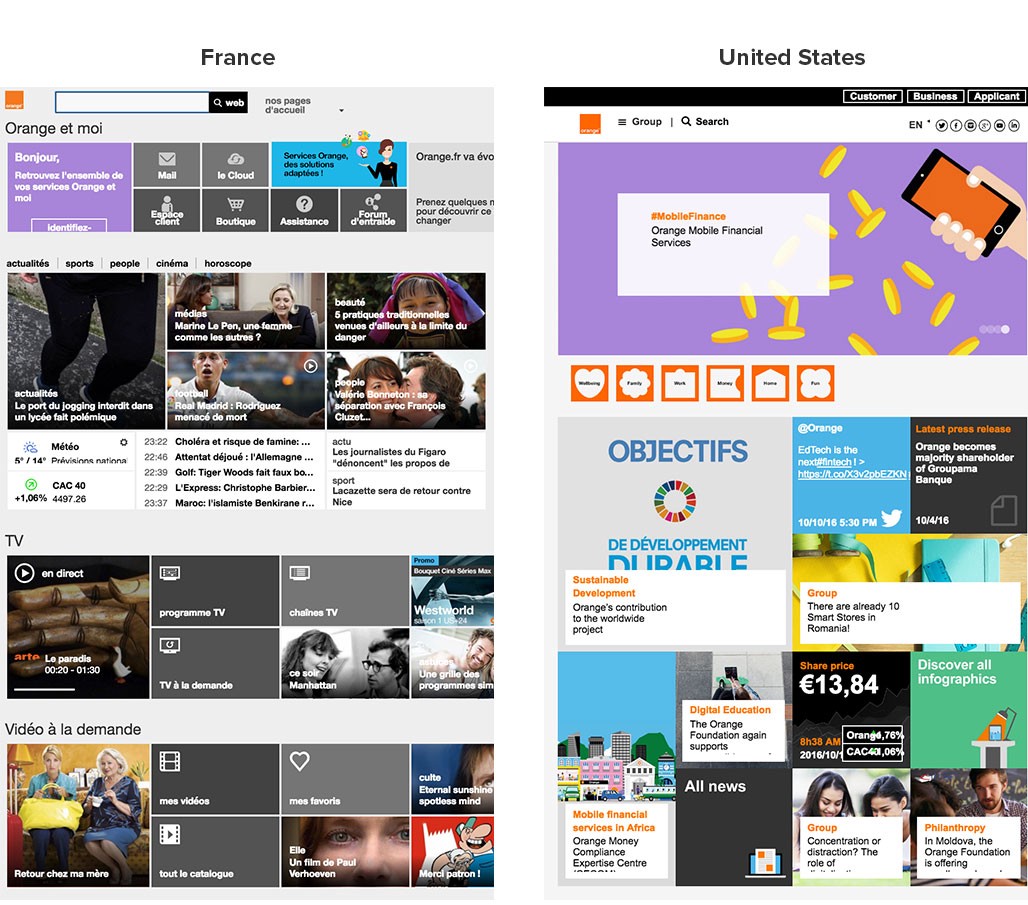 What immediately strikes the eye is the difference in the color palette and saturation. The colors Orange used in the French version are less animated and somewhat muted, while the localized American version features larger patches of intense colors such as light purple, orange, blue, and yellow.

Reading gravity is an essential concept in user experience design. It regards the pattern in which people tend to read and skim information on a web page. The common standard is the so-called F-shaped pattern.

While this is the commonly accepted standard in design, it is of course predominantly applicable in Western countries, due to the fact that these cultures read left-to-right, while Arabic countries use an inverse reading direction. Therefore, it’s essential to replicate the “reverse F” pattern for right-to-left reading cultures.

Localization is a very complex procedure that stems from linguistic adaptation and cultural translation and it has a fairly broad spectrum of benefits ranging from increased brand loyalty and higher conversion rates to more significant revenue.

Ultimately, the central idea of a localized website is bridging a meaningful communication with markets that your company hasn’t explored yet. Therefore, it’s essential to elegantly incorporate cultural content into your site’s branding and take the reading gravity into account.

Similarly, consider making the necessary adjustments to the font layout, based on the type of language you’re dealing with.

By applying these basic principles into your design localization strategy, you’ll most definitely establish a more meaningful connection with your potential clients.